Recently my boss started asking for more graphics editing and it was the perfect excuse to buy a Wacom graphics tablet, which is something I’ve wanted since college but haven’t thought I’d have a use for. I’m not really the artistic type. The drawing below (which I drew yesterday after work and probably speaks loads about the state of my unconscious) pretty much epitomizes my abilities: 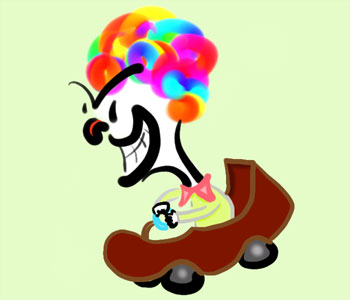 I opted for the 6×11 Wacom special edition, which is a sleek black color instead of their standard gun-metal gray and is huge (and a widescreen ratio!) without completely depriving me of desk space. The actual tablet is gorgeous, and over the past week and a half I’ve fallen completely in love with it. I had thought that tablets were only useful for drawing (hence my years-long hesitance over buying one; see above), but it also stands in as a great alternative to mousing (or, in my case, trackballing — which, incidentally, sounds a lot dirtier than it actually is). And, to be honest, although I’m no da Vinci, I find drawing the occasional diabolic clown a lot of fun.

But the real reason my introduction to tablets has been so great is because it’s opened up a whole new realm of software that I never before had a reason to explore.

Scribbles was the first thing I downloaded, of course. The program has some issues (no eyedropper, inability to move single layers around, etc.) but it’s still one of the most brilliant interface designs I’ve ever seen, and it makes drawing a quick after-work diabolic clown far easier than it should be.

ArtRage, on the other hand, was a program that I’d never heard of until I went looking for cheap, easy-to-use drawing programs, but it’s fantastically cool. I haven’t really found a use for it yet, but who doesn’t want to be able to use paints and canvas on their computer? Just swooping the paint brush around makes me feel so classy.

Then there’s Sapiens. I took a look at Sapiens when it was originally released and had absolutely no use for it. While I love the concept of circular contextual menus, I’m a hardcore LaunchBar fan who likes to keep his hands on the keyboard. When I’m using the tablet, though, LaunchBar becomes pointless because it’s a long trip back to the keyboard (and I have to put the pen down). When I realized that, Sapiens was the obvious choice for a mouse launcher.

And of course xGestures, which I’ve used for years, functions great with the tablet. (The key: large, steady strokes.)

The last thing that I’ve been finding myself using the tablet for has been taking notes (primarily useful during phone calls when I only have one hand available). Unfortunately, I have not yet found my perfect solution for this. SketchBox is a cool piece of software, but the stuff you sketch isn’t searchable. inkBook promises searching, but is less than stellar in actual use (just try using the erase tool and watch it casually destroy stuff you never touched; not fun). Circus Ponies Notebook 3 looks promising (and, considering past Notebook versions, will certainly be far more polished and feature-rich than inkBook), but it isn’t even available in beta yet.

I’ve tried using Apple’s Ink technology for note-taking, and while it’s mind-blowingly amazing that it can recognize my handwriting (which is legible to a select few people in this world), the technology’s implementation is a little too clumsy for quick text entry.

So the hunt continues, which, to be honest, is how I like it. I am admittedly a bit addicted to software demos. And I am, at least for the moment, hard-core addicted to tablets.