Yesterday I attended a wedding reception for one of my high school friends who reminded me that although he follows this blog, I have been extremely lax in updating it with much beyond descriptions of technical problems and how to surmount them. Whoops. Sometimes I forget that many of my old friends are not into Twitter, which is where I post most of my day-to-day ramblings.

So for those viewers interested in the Life and Times of Ian Beck, here’s an update on what’s been happening with me lately.

Probably my biggest news is that my girlfriend Valerie and I bought a townhouse together about 4-5 months ago. This caused no end of consternation amongst our more traditionally-minded relatives (“You bought a house? You didn’t get married on the sly did you? WTF, mate?”), most of whom are still not able to wrap their heads around the concept of a stable long-term relationship that hasn’t terminated in marriage, kids, and a 50% chance of a messy divorce. Most of these doubters are now waiting for the other shoe to drop; that is, for Valerie to announce that she’s pregnant, and for me to run off like the cad that I am and join the Foreign Legion to escape my responsibilities as a father. Sadly for them, despite growing up in Sumner I developed a working knowledge of contraceptives prior to becoming sexually active. This is thanks to my junior high P.E. teacher who, in direct defiance of district policy, took us into a classroom one day, closed the blinds, and taught us the mantra “latex, latex, latex”. Thanks, Mrs. B. You’re a life-saver. Or new life preventer. Whatever.

In any case, we are now happily situated in Columbia City, which is a great neighborhood in South Seattle. We’re a block away from the light rail station (which Valerie uses to get to work) and a block away in the other direction is the Columbia City downtown area, including an independent movie theater (which shows blockbusters the week they come out; fantastic place), numerous delicious restaurants, a to-die-for bakery, and other fun things.

A couple months prior to buying the house, expanded our little family unit slightly with the addition of Nal, who is a delightful African pygmy hedgehog: 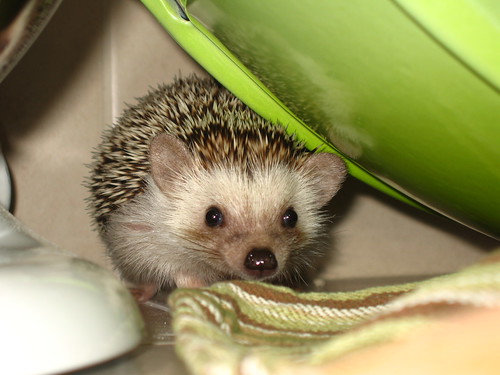 Before you have time to wonder, yes, hedgehogs are covered with quills. Nal in particular likes to show us just how sharp her quills are (she hates being picked up, and occasionally will ball up completely just to try and prove who is boss), but she also has a powerful curiosity and loves to explore. We have since discovered that Nal’s dislike of initial interactions is a personality quirk; one of Valerie’s friends recently got a hedgehog from the same breeder (and very similar lineage) who is delightfully friendly, if not so interested in exploring his surroundings as Nal.

On a more individual note, I recently changed employers from Tierra Technology, where I was primarily working on front-end web development, to MacRabbit, where I am doing a mixture of customer support, plugin development, and assorted other tasks as needed.

As you may or may not have picked up from other blog posts, I have been doing plugin development for MacRabbit’s text editor, Espresso (or Sugars, as they’re called in MacRabbit parlance) since shortly after the original Espresso beta releases. I also was spending a fair amount of time in the forums, to the point that I was playing unofficial support personnel. Jan (owner of MacRabbit) decided eventually that he needed help reducing distractions from coding, and asked me to come on full time as a part of the company. I happily accepted, since I love Espresso and the other MacRabbit products and looked forward to helping make the software I was using every day even better.

I’ve been a lot happier since making the switch; in my previous job I was getting frustrated because it seemed like I had learned all I was likely to learn. My coworkers generally knew less than I about the tasks were doing, so although I had learned quite a lot initially (and gained invaluable experience with web development), I’d hit the point where it felt like I was just doing the same things day in and day out without ever growing as a programmer. Working for MacRabbit has not only widened the range of tasks that I do on a day-to-day basis, but has also provided new challenges (and the opportunity to work with someone who knows far more about development than I do).

Speaking of programming, I also recently released my first standalone software offering. TapNote is an app for Palm WebOS phones that offers elegant note taking. Working on it is an ongoing learning experience, and although it has not been quite as eagerly adopted by WebOS users as I’d hoped, it is providing a (very slight) amount of additional income, which is nice. The reason I started development on TapNote was that I finally switched away from the iPhone (loved the device, hated the network) and since WebOS did not have any note taking apps that made me happy and the core languages are the web languages I’m already familiar with, it seemed a no-brainer to try my hand at app development.

Other than the house, hedgehog, and job changes life moves on apace. I’m still working from home (MacRabbit is located in Belgium, and although it would be awesome to visit the commute is a bit long otherwise), and Valerie is still dressing and undressing people at the Seattle Children’s Theater.

Now that you know absolutely everything about recent big events in my life, I’ll see about returning to the usual theme of solutions to development problems, occasional opinions about software, books, and movies, and other such boringly normal Beckism.com posts. At least until the next friend gets married and reminds me that people are sometimes interested in my personal exploits rather than my thoughts on WebOS databases and such.

Read “Splitting a string into lines in Javascript”
Read “Snippets.sugar for Espresso”

One response to “Houses and hedgehogs and job changes, oh my!”