When I was but a lad, my aunt introduced me to a little card game called Magic: The Gathering. And down that rabbit hole I went. Magic’s not perfect (and I haven’t purchased a card in years, at this point), but it certainly has provided me with years of entertainment and is a go-to game for some of the people I play games with to this day.

However, as the years went by, people I played Magic with tended to drift apart. College killed the hobby for me for a while, until I moved into a house with a few guys and discovered most of them had played when they were young. Then we graduated college, and now one of those guys is in Texas, another is just getting married, and I’ve got a baby on the way. All of which makes getting together for a game day every so slightly more difficult than when we could walk down the hall and say, “Hey, want to play a game of Magic?”

For years I have been trying one online TCG after another (or collectable card game, as some of them prefer to be called, since not all feature trading), but have been unable to find a fix worth replacing my Magic addiction with. So when I saw the announcements about Scrolls from the makers of Minecraft, I was highly intrigued. A game that isn’t pay-to-win? Tactical board game elements? Cards that transform into little animated characters? Sign me up!

Scrolls is now available for purchase in “public beta” form (whatever that means; frankly, once you start charging money you are providing a product no matter what you call it), and I have been playing it for the past few days to see if it will scratch my CCG itch.

Unfortunately, the short answer is “probably not so much.” While Scrolls is interesting, there are a number of flaws that are embedded deeply enough in the core gameplay that no amount of beta tweaking is likely to fix them.

(On the other hand, keep in mind that this is not really a review of Scrolls, because we are still very early in its lifecycle and Mojang has shown before that they are perfectly happy to charge for a very rough product, and then turn it into a completely different game by the time they proclaim it out of beta. So take these comments with a grain of salt, since they may well only apply to the game at the time of this writing.)

The curse of the starter deck

When you first launch Scrolls (after purchasing it), you will find yourself facing a choice in which starter deck to begin the game with. The choices are growth (lots of creatures), energy (machines and direct damage), or order (fewer creatures, more buffs). I chose growth, because who doesn’t like hordes of beasties?

Unfortunately, the growth starter deck at least is terrible (I can’t speak for the other, but strongly suspect them to be similar). It seems like Mojang opted for decks that provide a solid basis of cards representing the various things you can do with a given faction, rather than focusing the deck on a particular theme (the way I’m used to with Magic preconstructed decks). The good part about this is that once I accrue more cards (a lot more cards) I will have a good basis for deck-building faster.

The bad part about this is that the deck has so little internal synergy my first few games boiled down to more luck of the draw than anything else.

Take, for instance, this card (one of the few cards of which the growth starter deck contains the maximum three copies you could ever need): 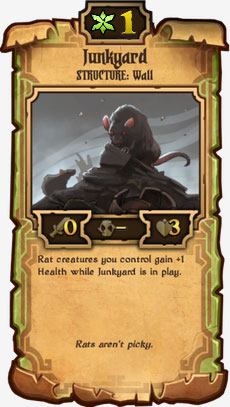 At first glance, this appears to be a pretty neat card. It only costs one resource (the prominent top number). It has three defense, so provides a nice little barrier between your idols (the back row you have to protect) and your opponent’s low-power creatures. And every rat you play gets an extra health! Sounds like the perfect first-turn play, to me.

Except that the starter deck contains no rats. (At this point, I’m not sure if there are any rats in the initial batch of cards at all; I’ve never seen one in any of the cards I’ve purchased, or any of the bouts I’ve fought. I assume they must be out there, though, or why does this exist?)

Similarly, one of the “rare” cards included in the starter is a wolf who gains power based on how many other wolves you have in play, but because there are so many non-wolf cards it’s very difficult to get that synergy working correctly.

Taken alone, none of the cards in the starter are bad (I can see a use for most of them, if only I had the cards to support them), but taken together the whole thing plays poorly and with very little synergy.

Okay, so I was disappointed in the starter, but after playing at least a couple hours daily over the past week (and spending the 2,000 “gold” that the game provides you to start out), I was able to tweak the preconstructed deck just enough that it began to work a bit smoother (good-bye, Junkyard!). At this point, I started becoming familiar with the things that Scrolls does well. In particular, it provides a number of interesting decisions:

All of this adds up to solving some of my least favorite parts of Magic: no lack of resources due to bad card draw, no turns where you’re just killing time hoping the one card you draw will make a difference, and no getting stuck with nothing in your hand and no way to refill it.

The flip side of tactical decisions

Unfortunately, there is a downside to all those tactical decisions that I love so much, and that is games that last quite a lot longer. Part of this is simply that you’ve got a lot of cards in your deck (50), so as long as one player doesn’t completely neglect to draw cards odds are good you’ll be able to pull something out to thwart at least some of your opponent’s schemes.

Additionally, because the game is so tactical, if one player gains a sufficient advantage in cards on the board, the end can be effectively decided long before the third idol falls. The card pool helps alleviate this somewhat by offering several things that can unexpectedly flip the game your way (creatures that attack the turn they come out, low amounts of distributed direct damage, etc.), but at least so far most of the games I have played have had a very clear winner by the mid-game and destroying the final one or two idols is mostly busywork as the winning player waits for their cooldowns to drop, which makes the game feel even longer.

Scrolls is fully asynchronous; on your opponent’s turn, you will spend your time passively watching whatever they decide to do. On yours, they’ll return the favor. This is extremely common in online CCGs, of course (playing Magic online takes forever, for instance, because both players have to be constantly opting out of responses whenever one player does something; in an asynchronous game this is a non-issue). However, it also reduces your investment in the game because if your opponent wants to take forever pondering the many decisions available to them, you might as well go out to coffee in the meantime.

Putting the “T” in TCG

While designing Scrolls, Mojang clearly was very interested in promoting a trading culture. There are basically three ways to get cards:

Of course you’ll notice that it is not possible to “pay to win” since the bulk of your cards will be purchased with gold (unless you can trade shards for gold with other players, which I have not investigated). This is good, because everyone is theoretically on an even playing field where your card collection is based more on how much time you’ve spent on the game than how much disposable income you have. But it is also bad, because it means that as the game gets older, it will be harder and harder for new players to collect a competitive set of cards without spending truly phenomenal amounts of time, either playing matches for gold or engaging in trades.

For me, this is a solid black mark against Scrolls because spending a bunch of time and energy trading has never been something I am interested in (not to mention the difficulty in figuring out what cards are worth, which requires up-to-date knowledge of the market and meta).

Coming away from my first brush with Scrolls, I get the feeling that this is a game that has been released at the wrong time in my life. I suspect that had it been release when I was younger, I would have loved it to pieces and spent far more time and money obsessing over it than I should. However, as I have grown older, my patience with games that demand huge chunks of my time in order to succeed has dwindled. I dislike arbitrary rarity schemes and the massive investment in time trading that they require to accrue a decent collection.

Oddly, although I find Scrolls’ theme to be one of the more unique fantasy worlds I’ve come across in a CCG recently, it ultimately leaves me flat. The idea that a bunch of people are wandering around with a giant collection of magic scrolls on their back just waiting to throw down is even less believable than things like Pokémon (which is saying something). Although the energy faction has some really quirky, interesting creatures, growth and order both feel very ho-hum to me (“wolves, and Vikings, and ducal liegemen…oh my?”).

In short, Scrolls demands a large chunk of my time, but the payout simply does not seem worth it. I will probably continue to try it on and off, and keep a general eye on its development, but at the moment it feels like something to idle away the time while I wait for Hearthstone or one of the other upcoming digital CCGs to fill the hole in my life left by Magic.