For those who are unaware, David Watanabe has released NewsFire for free, a day after updating it to version 1.5 (an update that I was initially not so impressed with). NewsFire is now free the same way that NetNewsWire is free: no restrictions, no ads, no limited version. See the announcement in his own words.

I am really excited that the two best RSS readers on Mac, NewsFire and NetNewsWire, are now both free. Although I’m sure that NetNewsWire will remain the de facto king of the RSS hill on the Mac (it was that before it was freed up), NewsFire is still a compelling option (particularly for users new to feed reading).

To give you a bit of background, I’d used NewsFire for years up until NetNewsWire was released for free about a little over a month ago. I switched to NetNewsWire because there were several problematic aspects of NewsFire that at the time didn’t seem likely to ever get fixed (it looked like the developer, David Watanabe, had given up on development).

NewsFire is a wonderful example of beauty melded with function. Designed to provide easy access to your feeds, NewsFire eschews complicated options for a streamlined interface. I’ll give you an example:

Unlike most news readers, NewsFire does not have a built-in browser for viewing articles full text. When I first tried it, I thought this would be a deal breaker, but it’s actually one of its strengths. OmniWeb (my browser of choice) is a much better browser than any WebKit implementation in a news reader. By not including a browser, NewsFire keeps browsing in the browser, and feeds in the reader.

This is a quintessential example of how NewsFire has been designed. NewsFire does not aim to have a comprehensive feature list. Instead, its goal is to include the most important features for browsing RSS feeds and to execute them stylishly and well.

NewsFire’s interface is a two-pane affair. On the left you have the sidebar, which contains groups (that cannot be nested), smart groups, and feeds. On the right is the main browsing area. When NewsFire finds new headlines, it rearranges the sidebar based on what feeds have been updated (sorting updated feeds by name, number of updates, or which has the most recent item based on your preferences). Feeds whoosh around as they’re updated, which is fun, if functionally useless. 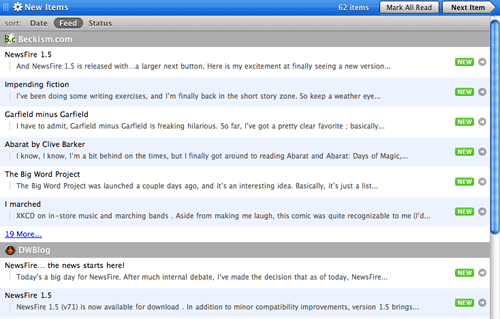 I find that sorting by feed in the New Items smart group is the best way to navigate through NewsFire. As you can see, headlines are grouped under their feed, and if there’s a lot of headlines they’re hidden behind a link. Aside from being clean and appealing, this layout makes quickly skimming through your feeds very easy to do. I don’t know about everyone, but for me there are some feeds I subscribe to that I want to read every single headline and others whose headlines I just want to skim. Thanks to NewsFire’s organization, I can quickly scan down the list, knowing exactly what headlines deserve more attention and which less because I always know which feed I’m looking at.

To read a headline, you just click it and its content replaces the list in the main browsing area. This may sound a bit untenable to people used to a three-pane interface, but it works surprisingly well. The list of updates is merely a click or keyboard shortcut away, and if you want you can stay in the full-text view and quickly skip from new headline to new headline with mouse or keyboard, opening interesting links in the browser behind NewsFire as you go.

NewsFire’s preferences offer a number of options for tweaking the appearance and behavior to meet your needs, but the basic look and feel of the program doesn’t change. This relative inflexibility is NewsFire’s primary weakness. If the way it presents information makes sense to you, then you’ll probably love NewsFire. If it doesn’t, you’ll may find yourself wondering why anyone would use the application in the first place.

NewsFire’s other main weakness isn’t the software: it’s the developer. David Watanabe is, at best, unresponsive to customers. At worst, he’s hostile (or so I’ve heard; never having received a response I don’t actually know first-hand). There may well be some people who have had their emails answered, but personally, I’ve never even received an acknowledgement that he received a feedback email from me, and judging from the responses I’ve seen around the internet, this is probably the best I can hope for. Particularly now that NewsFire is free, I suspect that support will be even more nonexistent. If that isn’t a contradiction in terms.

Any other weaknesses are basically minor quibbles, although they can add up over time. The one that pushed me from NewsFire to NetNewsWire was the fact that NewsFire gives you no indication of whether it’s downloading headlines or not. If you have a lot of feeds this can become an issue because the New Items smart group resets whenever a new item is added to it. For instance:

You notice a green number in NewsFire’s dock icon, which means there’s new feeds. You switch to the program and start to scroll through the New Items list. Although you didn’t know it, NewsFire is still fetching headlines, and a new feed is added to the list. The scrollbar jumps to the top and you, lucky devil, get to start over again. If you happened to be reading the full text of an item, when you return to the list you’ll be returned to the top of the list and all the read items will have been removed (if you’re reading outside of an active update, they stick around until you’re done, making it easier to keep your place). It’s a small thing, but it gets really, really annoying over time.

What’s perplexing to me is that there’s a progress indicator in the screenshot on NewsFire’s homepage. I’ve been refreshing feeds and never seen it, though, so I presume it only shows up if a podcast or video is being downloaded. I’d email Watanabe to ask if I thought I’d get a response.

Despite these downsides, if you try NewsFire and the way it presents feeds makes sense you to, you’ll probably love it. Unless you find a feature that annoys you (like the lack of a progress indicator for me), you’ll probably never care about Watanabe’s substandard support because NewsFire is rock solid.

And on the other hand, NetNewsWire

NetNewsWire approaches RSS feeds from a very different direction. Where NewsFire has taken a single approach to feeds, slimmed it down, and made it as appealing as possible, NetNewsWire has taken a basic three-pane interface, familiar to any Mail user, and then opened up the possibilities.

You can customize just about everything in NetNewsWire, which for a first-time user can be quite overwhelming (I know it was for me). There’s something for everyone in NetNewsWire; the tricky part is finding it.

Although it offers a combined view that is similar to NewsFire’s (if an inferior implementation), NetNewsWire’s standard presentation of feeds uses a Mail-like list, with information about the headlines presented in columns. Because it’s more difficult to keep track of what headlines are in what feeds (if you’re skimming through the Latest News list), NetNewsWire encourages a slightly more leisurely way of navigating. In the sidebar, you can nest groups inside of one another, and it’s often more useful to group feeds and then browse the groups rather than trolling through the whole list of headlines.

One of my favorite features, and an excellent example of the customizability behind NetNewsWire, is the ability to choose different themes for displaying full-text for headlines. Whether you want to add a little color to your feed browsing or pick a style that delivers the information as clearly as possible (I highly recommend Simply Structured if you’re going for the latter), custom styles let you make NetNewsWire your own in a way completely impossible in NewsFire.

To be quite honest, there isn’t much more to say about NetNewsWire. I couldn’t possibly cover all its features because there’s so many different options. Suffice it to say that NetNewsWire is a professional, well-refined news reader with a high amount of flexibility and power. Although it may be more difficult to just pick up and use (particularly if you are not familiar with RSS feed readers), once you’ve tweaked it to work the way you want, you’ll be very happy with it.

As far as support, I can’t really comment. Given that NewsGator is a company (rather than an indie developer), I suspect you’ll be more likely to receive support if you ask for it, and I know that Brent Simmons (the developer) takes user feature requests and so forth seriously, even if (in my limited experience) he doesn’t respond to them, either.

NewsFire’s release as a free product is not likely to cut into NetNewsWire’s dominance. Although a few people might be tempted to switch, overall NetNewsWire users are probably too used to the three-pane approach and multiplicity of options that NetNewsWire provides. However, for people newly in the market for a feed reader, or for people to whom NewsFire’s workflow makes a lot of sense, NewsFire is a strong contender.

For people new to feed reading, I recommend trying NewsFire first. Its approach to feeds will either make a lot of sense to you or it won’t. In the former case, you’ll be happy with NewsFire for some time. In the latter, you can easily switch over to NetNewsWire and try it out. NewsFire has a much smaller learning curve (practically nonexistent), so it’s an excellent introduction to the world of feed reading, whereas NetNewsWire has a steeper learning curve but is likely to appeal to people who want fine-grained control.

There are a few thing to consider beyond the applications themselves, though. NetNewsWire is clearly going to be better supported and has a much higher likelihood of getting updated than NewsFire because it’s backed by a company whose business is feed reading. NewsFire, on the other hand, is now a free offering from an indie developer who hadn’t been updating it much even before NetNewsWire went free. I suspect that long-term NewsFire will end up stagnating.

I hope I’m wrong, of course; I think that NewsFire has a lot of potential if Watanabe puts more effort into it, but given that he’s now released it into the wild this seems less likely. It was in NewsGators’ best interest to free NetNewsWire because doing so adds value to their other products. It is much less in Watanabe’s interest to free NewsFire because all it gives him is a better chance of gaining new users (who, granted, may then end up buying his other software). It may be that Watanabe has decided to give NewsFire a slow death rather than the quick one that it was headed for thanks to NetNewsWire’s drastic price change.

But enough gloomy suppositions! At least for the near future, users have the happy ability to choose between two excellent feed readers, both absolutely free. Despite my pessimistic opinions about NewsFire’s long-term outlook (and Watanabe could well prove me wrong; fingers crossed), right now NewsFire is still a very compelling option for people who don’t need or want the power of NetNewsWire.

Update: in a response to a comment on his blog, David Watanabe speaks out about NewsFire’s future: “I have design and feature plans for 2.0. Whether or not those plans translate into reality is up to too many variables for me to comment. Right now my priority is Xtorrent.” Here’s hoping that those variables work themselves out, and he does continue to update NewsFire!

One response to “Comparing NewsFire and NetNewsWire”