After a seemingly interminable wait, my copy of Microsoft Office 2008 arrived without warning a few days ago. I was mildly excited (after all, I’d heard really good things about the interface improvements, and I love playing with new software).

Then I installed it. While I have to admit that the interface is somewhat improved (at least in Word; I haven’t used the others as much), there’s one little problem that the reviews I read failed to mention:

At its core, Office 2008 isn’t more Mac-like. It’s more Vista-like. This is perhaps a subtle difference, thanks to the fact that many of Vista’s improvements are inspired by Mac OS X.

I have, admittedly, only used Vista briefly, but from those brief encounters, it seemed to me that Vista introduced a number of nifty visual effects that increased the system requirements without serving any functional purpose.

This is one of the big differences between Apple and Microsoft’s approach to interface design. Apple’s Aqua interface has a number of cool visual effects (Exposé being one of the most obvious). In general, Apple designed said effects to reinforce the way the operating system works. Exposé’s swooping windows immediately communicate what is happening to the user without any need for textual explanation. Even Time Machine’s over-the-top space animations effectively tell the user what the program is doing.

(The only obviously superfluous effect I can think of off the top of my head is the ripple effect in Dashboard when you add a new widget. Whenever I need to remind myself that Apple isn’t perfect, I add a few new widgets to Dashboard. Ludicrous.)

Designing Vista, Microsoft seems to have asked themselves why OS X is doing so well and then decided that it was because of the interface’s bubbly appeal to the user. They then proceeded to implement a number of visual effects in Vista, including highly transparent windows, glowing buttons, and “Flip 3D” tab switching.

These visual effects do make Vista more appealing (translucent windows in particular are pretty cool). However, they also incur a hefty hit to the system requirements, and most of them, to be perfectly frank, are superfluous. In point of fact, if you don’t have a good enough graphics card or just don’t like the eye candy, you can turn Vista’s visual effects off.

The fancy transparent windows and so forth of Vista are unnecessary, and Microsoft designed them knowing they served no functional purpose (otherwise they wouldn’t be optional). They’re like cheap frosting on a homemade cake. All they add is a few pounds to your waistline, and cake would have been just as tasty without them.

When Apple designs a visual effect, they don’t let you turn it off. Expos´’s eye candy isn’t optional because it is an integral part of Expos&eacute’s function. Apple undoubtedly went through a number of different implementations for Expos&eactue and chose the one we know and love because it was a great marriage of form and function.

Both Apple and Microsoft invest time and effort into carefully designing appealing visual effects, but Apple takes care to remember that unless the visual effect has a purpose, you’re probably better off freeing up some of the computer’s memory.

Which leads me to Microsoft Office 2008. One of the first things I noticed when I launched Word 2008 (aside from the fact that it took almost as long to launch as Word 2004 did; ouch) was a superfluous visual effect. Specifically, the rippling button mouseovers down in the lower left corner. See for yourself:

[ Javascript required to view QuickTime movie, please turn it on and refresh this page ]

This is Vista-style design at its best:

Granted, this is a single, small detail, but it’s representative of the overall approach to Office 2008’s design. Microsoft’s Mac Business Unit has tried to make Office a better Mac citizen by imitating Apple design patterns without taking the time to understand either Apple’s method or design logic.

Rippling buttons may be a harmless example of the results of imitating Apple interface design without understanding the underlying logic (disregarding for the moment the performance hit caused by lots of little interface embellishments adding up), but the Word preferences window shows how design without logic can make using the software difficult. Word 2008’s preferences have been considerably changed from 2004 and now resemble a standard Mac program preferences screen: 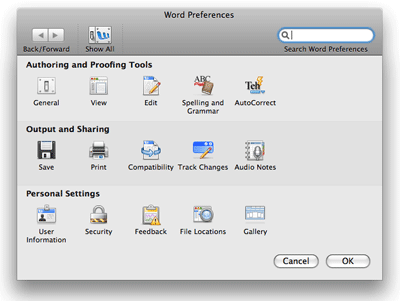 On the surface, definitely an improvement. The problem is in the details: two of those preference buttons are document-specific preferences. They aren’t even separated out, but are rather intermingled in with the program-wide preferences (the two in question are Security and Compatibility). The preferences window may look similar to other Mac preference windows, but the underlying design logic that governs Apple products simply isn’t there, making the entire thing confusing and difficult to use.

Although I haven’t yet explored PowerPoint, Excel, and Entourage in detail, my initial cursory use of them hasn’t done anything to change my opinions about the general design ethic throughout Office 2008. To be honest, I’m really disappointed. I was hoping that when reviews said Office 2008 was more Mac-like it meant that Microsoft applied some Apple design logic to improve the user experience instead of making changes based on Apple’s superficial interface.

On a more positive note, Office 2008 is an improvement over Office 2004. Once things are running, the programs are a little bit more responsive, and some of the notable downsides to the program don’t affect me (I never used the VBA scripting language, for instance). Given that I paid practically nothing for the upgrade thanks to the “super suite” deal, I can enjoy the positives without worrying about the negatives. I don’t regret upgrading to Office 2008, but I’m disappointed at the many missed opportunities in the program.

Overall my relationship with Office is unchanged. I only ever used Office 2004 when I had to (mainly so I could be guaranteed of compatibility with clients), and there is nothing in Office 2008 that would encourage me to use the software voluntarily instead of turning to Nisus Writer Pro or the iWork suite.

I hope that one day Microsoft will realize that what makes Apple products attractive isn’t the lickable interface, but the design ethic that underlies all of their decisions. For now, though, upgrading to Office 2008 is like upgrading from Windows XP to Vista; prettier, but with the same intrinsic flaws.