I’ve shared my exploration into the world of tablet-friendly software, and there I recommended Sapiens, an application launcher that uses a mouse gesture to pop up a circular menu that provides you with quick-click access to the programs that you most often need in that context (Sapiens watches your habits and learns what programs you need/want the most over time). It’s a clever piece of software that’s beautifully designed.

But I’ve got a little secret for you: Sapiens actually totally sucks when you use it with a tablet. I don’t know about you, but when I’m drawing I tend to use a lot of circular motions. Sometimes I use motions that aren’t actually circles, but that are close enough for Sapiens. After about the third time I see Sapiens’ expanding dotted lines, I’m usually swearing like a sailor.

Sapiens does provide a list of excluded applications, so I could, for instance, disable it in my various drawing apps where I use circles the most. However, this totally defeats the point of using it for me since I’m mostly needed it when I’m using my tablet, and I’m mostly using my tablet when engaged in an artistic endeavor.

Fortunately, there is a simple solution: xGestures. xGestures has the happy benefit of requiring you to hold down a button while you make the gesture (right mouse button by default, which translates into the bottom button on a Wacom pen), so unlike Sapiens it rarely activates accidentally unless you make a habit of holding down the right mouse button while you move your mouse around.

To rid Sapiens of its annoying mouse gesture, circle your mouse for the last time, click the preferences icon and set things up in the “Activation” tab as shown (just follow the orange arrows): 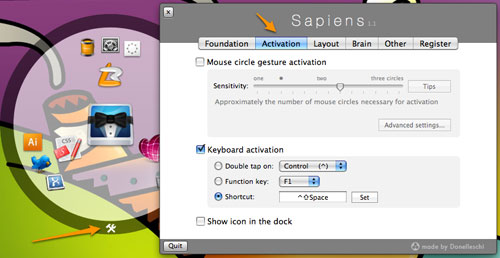 You can set the hotkey to anything you like (just make is obscure so that it won’t be likely to conflict with another application). Then in xGestures, set up the gesture. I used a circle (after all, why not?). If you do use a circle and are using a tablet, I recommend drawing circles with xGestures a few times before you actually define the gesture. I found that my typical circle can register in a number of different ways, but by drawing it a few times I found the one that I use the most often, and then stuck with that.

And now that Sapiens is actually on-demand instead of constantly interfering, life is much, much better.